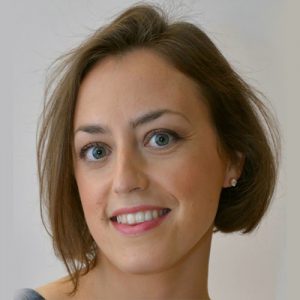 Kate Krontiris is a Business Associate with Maendeleo Group. She is also an ethnographer, strategist, and facilitator working to understand and transform civic life. In the past three years, she has served as a consultant to Google, the Knight Foundation, and the Omidyar Network, among others. Until recently, Kate also served as a consulting user researcher for the newly-formed U.S. Digital Service within the Executive Office of President Barack Obama. For the 2016-2017 academic year, Kate is an affiliate of the Berkman Center for Internet and Society, at Harvard University.

Kate is best known for her applied research on how people use technology for civic purposes. Her seminal work focused on what motivates America’s “Interested Bystanders” to get involved with civic life, the findings of which were applied to product development at Google and shared through targeted briefings to foundations, non-profits, and social enterprises across the civic tech ecosystem. Kate is currently facilitating a continuation of this research in Charlotte, N.C, funded by the Knight Foundation and in collaboration with both Google and Facebook.

Previously, Kate shepherded a discovery and design process on behalf of Personal Democracy Media to investigate and envision a new center for civic innovation in New York City, known as Civic Hall. She also led a first-of-its-kind investigation into American elections, to assess the human motivations, technological systems, and institutional landscapes that define elections administration at the most local levels, on behalf of the non-profit, non-partisan civic startup Democracy Works.

As an organizational development strategist, Kate has over 15 years of facilitation experience. Most recently, she designed and facilitated an action-planning workshop for first-ever group of “Pay for Success” grantees, on behalf of the Corporation for National & Community Service. She also designed and facilitated the art startup Artsy’s all-staff retreat for the past two years, focused initially on culture and values, and then more recently or organizational growth and development. She has also led organizational development processes with the Omidyar Network, the Pluribus Project, and Etsy, among others.

Before she launched her own business, Kate served as a Principal at Reboot, a social enterprise working to improve governance and development worldwide. She oversaw domestic business strategy and organizational development at the organization. While at Reboot, Kate designed and facilitated a number of high-profile and delicate organizational processes for clients, including an assessment, visioning, and operational planning process for the Internews Center for Innovation and Learning; and the first reflection and visioning retreat for Merck for Mothers, a 10-year, multi-million dollar initiative to reduce maternal mortality globally.

Trained in mediation and conflict resolution, Kate worked with a team at the United States Department of State to develop the concept of “mobile justice,” linking survivors of sexual violence to mobile courts through connection technologies. She served as a researcher for Eric Schmidt and Jared Cohen’s book “The New Digital Age: Reshaping the Future of People, Nations, and Business,” where she developed a global connectivity index to compare nations against each other.

Prior to her graduate education, Kate built a career in problem-solving justice and mediation. Working with the Center for Court Innovation around New York City, she shepherded a multi-stakeholder task force on prison reentry in Harlem and developed meaningful community service initiatives for the Bronx Criminal Court. She also mediated over 150 conflicts through youth court and conflict resolution programs.

Kate is a graduate of Columbia University. She received a Bachelor of Arts in Sociology, earning departmental honors. She holds a Masters in Public Policy from Harvard University’s Kennedy School of Government and an MBA from MIT’s Sloan School of Management. She serves on the board of Democracy Works and is an alumna of the AmeriCorps National Service Program. Kate lives with her husband and daughter in Nairobi, Kenya.