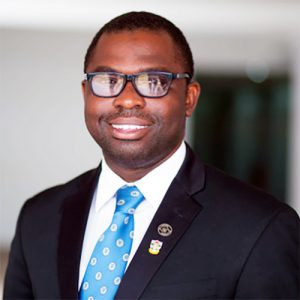 Edmund Foley is a Business Associate with Maendeleo Group. A practising lawyer at the Ghana Bar, he also teaches Criminal Law and Human Rights Law at the Faculty of Law, Administrative Law and Public Sector Legal Framework at the School of Governance, Ghana Institute of Management and Public Administration (GIMPA). He is also a part-time lecturer at the Centre for Social Policy Studies (CSPS) of the University of Ghana, where he teaches Child Protection in the Masters in Social Policy Programme.

Edmund Foley has over 10 years’ experience in legal and political risks analysis with a focus on a human rights based approach. He served as the Technical Advisor on Children Rights at the Ministry of Gender, Children and Social Protection of Ghana 2014 – 2015. Mr Foley led the development of two key national policies – the Child and Family Welfare Policy and the Justice for Children Policy. He also played a key role in the reform of the adoption system in Ghana and was a member of the team of experts that developed and reviewed the Children’s Act, 1998 (Act 560) as part of the reform efforts. The Children’s Amendment Act, 2016 was passed by the Parliament of Ghana in October 2016. Mr Foley also served as a member of the Ghanaian Government’s delegation to the UNICEF Executive Board Meeting, the UN Committee on the Rights of Child and the African Committee of Experts on the Rights and Welfare of the Child. H continues to provide technical and legal expertise to the Ministry.

In 2012-2013, Edmund was the Head and Senior Researcher of the Children’s Rights Project of the Community Law Centre, University of the Western Cape where he led the Centre’s work on children’s rights in Eastern and Southern Africa. He managed the UNICEF-ESARO-funded programme on supporting law reform initiatives in Eastern and Southern African countries. He provided technical assistance to UNICEF Country Offices and Governments in Kenya, Malawi, Uganda, Burundi, Rwanda, South Sudan, Lesotho and Swaziland on child law reform processes.

In 2007 – 2011, he was a Legal Officer at the Institute for Human Rights and Development in Africa (IHRDA) and the lead officer on child rights and national human rights institutions (NHRIs). He was instrumental in the establishment of the National Agency for Legal Aid (NALA) of the Gambia and undertook a national mapping exercise of local initiatives for legal aid in the Gambia, funded by the UNDP. Prior to joining IHRDA in 2007, Edmund was an Associate in Sam Okudzeto and Associates, a leading law firm in Ghana, where he contributed to the firm’s successes in landmark cases in constitutional law, human rights, property law and commercial law.